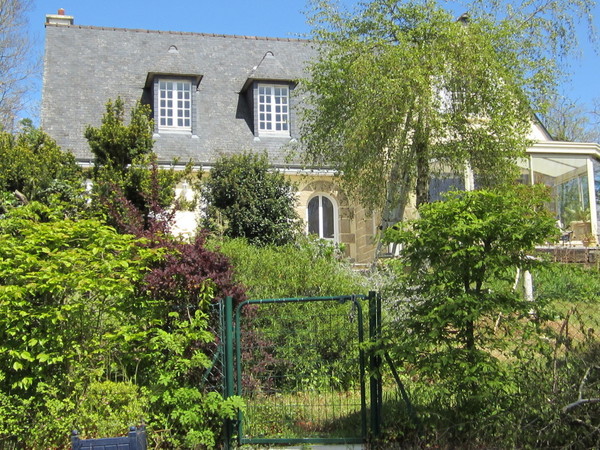 Belle Vue is situated about 130 m above sea level which is quite high for Brittany. It has stunning views of the surrounding countryside, is not overlooked, and stands in 700 m² of landscaped gardens. The property was constructed in the 1970's but in the last few years has undergone extensive modernisation. There is a self contained apartment with twin beds, kitchen and shower room available for £300 per week plus a double en-suite room with provate W.C. available for £50/night including continental breakfast.

Situated in Brittany, Lamballe is a town in the Cotes dArmor and has 14,000 inhabitants. The population is increasing with the addition of the TGV direct to Paris & Le Mans. The town lies 15 km from the sea and 20km from Saint-Brieuc. The history of Lamballe goes back many hundreds of years, as the presence of the Menhir ( standing stone ) of Tregomar attests.

In the 10th century, Lamballe was an important stronghold of Brittany. Unfortunately, the War of Breton Succession and measures of retaliation by Cardinal de Richelieu gradually destroyed the castle.

In 2005, Lamballe was selected to join the network of Historic Cities of Brittany, because of its interesting historic heritage. With the Haras of Lamballe, it is famous for the Breton shire horses and stallions. In the Haras you can find a huge stud farm in which 12 stalls sheltered around 400 national stallions until the middle of the 20th century. This stud farm is today reinforced by an equestrian park of 14 hectares. Now you can discover the beautiful horses through shows, exhibitions, activities or guided tours.

Lamballe can be described as a thriving market town located mid way between Dinan and Saint Brieuc on the N.West coast of Brittany. It is within 1 hours drive of the ports of St Malo and less than 3 hours from Le Havre and Caen. Dinard airport is 45 minutes away and Rennes 1 hour and Brest 2 hours. The TGV is within walking distance of Belle Vue.