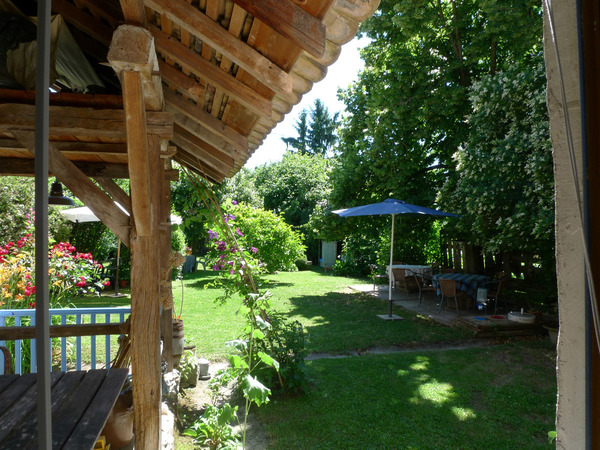 The house of hosts the garden includes/understands 2 rooms: One, the garden equipped with a double bed and 2 beds independent of a person, medical privative and integrated. The other, the orchard, in a spirit continuation is equipped with 2 double beds, of two beds of a person and medical privative. The interior court is used as carpark. The large shaded garden makes it possible each one to settle in one of the many corners, salt garden or hammocks, at any hour of the day, before or after appéritif the house offered by Annie and Henri, before or after a bath taken in the swimming pool except ground. With the liking of time and seasons, the breakfast and the meals in table of hosts are been useful under the lime or in the common living room. This last is equipped with a television at disposal.

Chart Michelin N° 74 regional Chart Isère-Savoy n° 333. Coming from Paris: Motorway A6 direction of Lyon. On the level of Mâcon, to follow Geneva - Borough to Bresse - by A 40. On the level of Bridge-D' Ain, to take A 42. Then N°8 exit: AMBERIEU; To follow Grenoble direction by main road 75 until Morestel. To cross the borough jusqu `to a round not (with water jet), to take Belley direction on the left up to the level of the village Stopping (not to even return in the village), to supervise on the line a small factory (ets Lestra), to take with its angle minor road indicating Buvin. In the hamlet the polossat to follow centre town on the left, to go up to the heart of the hamlet of Buvin. As soon as you see the church, it is there on the right. A large plane tree and a large barrier in bamboos confirm that you are with the good address. To then take the small way which goes down on the line close to the house to the blue shutters. Coming from Grenoble: to take main road 75 in direction of Borough-in-Bresse to the village of Veyrins. or: To take motorway A 48-E 711 Lyon direction, either to Voiron, exit N° 10, then to take main road 75 in direction of Borough-in-Bresse to the village of Veyrins, or, when you are on this motorway to take the change of motorway while forking on A 43, then, left the Turn-of-Pine n° 9. With the Turn-of-Pine to cross the city and to take Chambéry direction by main road 516 to the 1st round not after Batie Montgascon then Borough-in-Bresse direction by main road 75 until Veyrins. In Veyrins with the round not to take on the right to the Oat-fields, to pass the place of the fields from March then to supervise to 100 m on the left: , to take Buvin. In Buvin on the level of the place church to take it on the right direction Stopping. To make 100 meters and the garden is the 3rd house on the left. (barrier of bamboos). Coming from Lyon: To take the motorway A6 Grenoble direction, left the Turn-of-Pine n°9, then to follow the indications above starting from the Turn-of-Pine Coming from Chambéry: To take motorway A 43 for Lyon then to take the exit n°11. To take direction St Genix-on-Guiers by secondary road 916 A. Là, to take the direction of St Didier of Aoste by the secondary road D 40, with St Didier, direction Oat-fields. In the center of the village of the Oat-fields to take Buvin direction on the line. In Buvin, on the place, to take the road on the right indicating Stopping, to make 100 m (3rd house on the left with large barrier of bamboos).