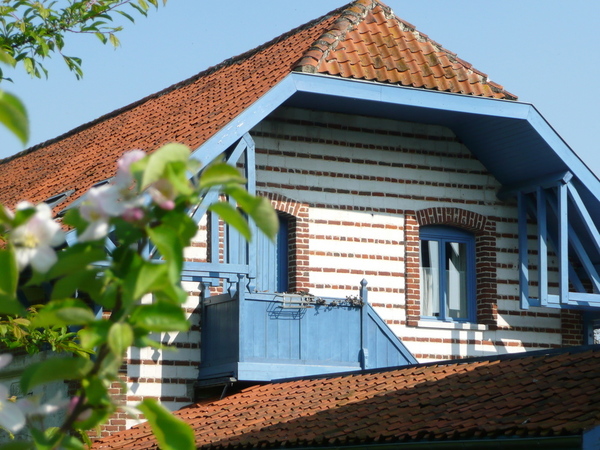 Petit Tambour Lodge is in the grounds of a Manor House built by Antoine de Saint Just in 1789 in Autingues, a quiet country village near the historic town of Ardres in Northern France, an hour from both Lille and Bruges.

Petit Tambour Lodge is an ideal place for holiday makers, hikers and nature lovers to rest and to appreciate quiet country life, as well as those who enjoy visiting wonderful natural sites such as Cap gris nez and Cap blanc nez.

Calais is 16 km away and the A.16 and A.26 moterways are easy to get to as is the Channel Tunnel, the Cité Europe Shopping Centre and Marques Avenue.

The Lodge has four double rooms, one of which is suitable for disabled people and perfectly accessible for wheelchairs. Each room has its own shower-room and toilet. There is also a Family Suite which sleeps up to four people. The Lodge has its own private entrance, parking facilities and garden. (Animals are not allowed in the bedrooms). Cots can be supplied on request and a tennis table and VTC in hiring on reservation are available for guests use. A stable with boxes and pastures are at the disposal of the riders.

From Calais: Take A16 motorway as far as Sortie 46 direction Saint Omer/Ardres. Follow directions for Ardres/Saint Omer on the D943. You will go through three villages, Les Attaques, Pont dArdres and Bois en Ardres before coming to the traffic lights in Ardres itself. At the traffic lights turn left and go on to the junction at lallée des tilleuls. Here turn right and follow directions for Licques on the D224. When you are in front of the gendarmerie in Ardres take the D225 in the direction of Louches. One km further on you will arrive at Autingues. The Petit Tambour Lodge is just after the square on this same road, number 288 (it is a big white house with blue shutters)

From Paris: Take A.1 motorway in direction of Lille /Bruxelles. Take A.26 and E.15 following directions for Calais.Take Sortie N° 2 direction Ardres and then the D217 followed by the D943 direction Calais for 5 km. When you see le plat dor, just after a TOTAL garage, take the D227 on yourleft. At Autingues turn left on the square on the D225 towards Louches and the Lodge will be on your right.

From Lille: Take A25 motorway (Lille Dunkerque) then take A.16 motorway (Dunkerque Calais). Take "sortie N°50" OYE PLAGE then take the D224 in the direction of Audruicq and Ardres then the D225 in the direction of Louches. One km further on you will arrive at Autingues. The Petit Tambour Lodge is just after the square on this same road, number 288 (it is a big white house with blue shutters)