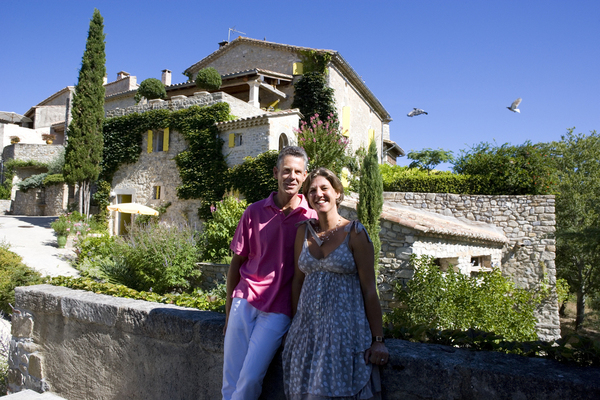 Mas Vacquières, a secluded jewel, located in a cluster of centuries-old stone farmhouses, romantically nestled in a wooded hamlet in one of the most beautiful areas in France; the county of Gard in the Languedoc-Roussillon nearby the Provence with its Lavendel, Avignon Palace of the Popes, Nimes with the Roman influences and the world famous Pont du Gard, Uzès and the colorful market on Saturday, the Cevennes and the Gorges du Tarn, Camargues known for its white horses, flamingos and wonderful white beaches. We welcome our guests as if they are family and make superb dinners served on our flower-laded terraces with products of the region.

The nearby historic City of Uzès ( the first Duchy of France) has many monuments, such as the Ducal Castle and the Frenestelle Tower. Apart from the typically medieval magic you may enjoy the wonderful little shops, the picturesque market twice a week on wednesday and saturday with a Provencal scent and a lot of handcraft products and the numerous cosy outdoor cafés. Mas Vacquières is quite close to Uzès !

Pont du Gard, the 2000-year-old example of Roman architecture. Part of a 50 kms long, partly underground waterway, it transported water from the source of Uzès to the City of Nîmes.

The City of Nîmes, also the French Rome, has many well-preserved sights, such as Maison Carrée, the imposing Roman Arena, the Tour Magne and Jardin de la Fontaine. Furthermore its summer festivals, named Ferias.

The City of Avignon, the walled town on the Rhône river, still shows its importance as medieval religious European centre; the Palais des Papes (Popes Palace) with its ten towers an impregnable fortress. Between mid-July and mid-August the Palais des Papes is the centre of the well-known Avignon Festival.

The City of Arles, has a long history and considerable important in the Roman province of Gallia Narbonensis. And well-known for the Dutch post-Impressionist painter Vincent van Gogh; 1888-1889.

Montpellier worthwhile visiting, is one of the few large cities in France without any Roman heritage. In 1289 was the University of Montpellier founded, one of the oldest Universities of Europe, it has a lot of winding small streets with shops and a lot of sightseeing to do.

Besides discovering these places of interest there are plentiful opportunities for walking. It is our pleasure to advise you !! Lots of Medieval places worth seeing, golfing, horseback-riding, canoeing and even going on a balloon-flight is among the possibilities.

Beyond Montelimar, take the exit 19 (Bollene).

When you have left the Route Peage follow the traffic signs to Pont-St.Esprit (D994).

Just before Pont-St. Esprit take the road to Alès and Bagnols S.-Ceze (N86).

Passed Bagnols S.-stay on the road to Alès (D6).

After 23 km take the exit to the left to St.Just et Vacquières(D7).

Having passed the village St. Just take the first road to the left up to Vacquières (D339).

At the end of the D339 there is a sign Chambres d'Hôtes Mas Vacquières to the right, please park your car on the car park. Our Chambres d'Hôtes is the country house with the yellow shutters.