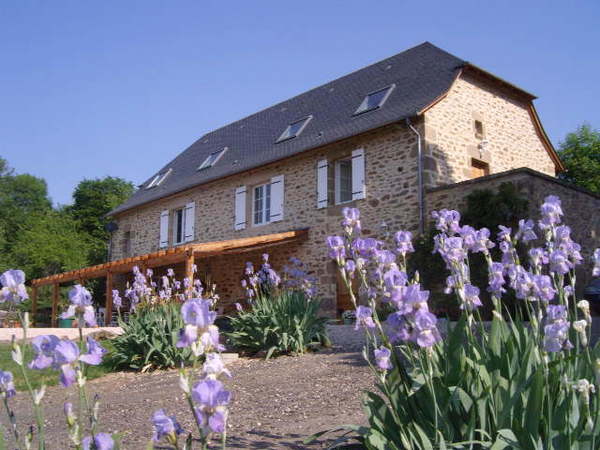 We have a total of four bedrooms.

The Arches: this is a double bedroom, with its own shower room and seperate toilet. It is independant of the house and has its own parking and terrace. It has a hospitality tray with coffee and tea. The cost of this room for the night is 60 euros, breakfast included.

Chimney Bedroom: So named as it was the originall kitchen of the old house, with a stone sink in the window and a large cantou (fireplace). This room has its own terrace and separate entrance, but it also has a door into the house, with a double bed and two single beds. It also has its own shower room and separate toilet. The cost of this room for 4 people is 90 euros per night including breakfast. There is also a hospitality tray with tea and coffee.

Star Bedroom : This bedroom has a double bed, and is on the third floor of the house, so the views out of the windows are breathtaking. With its own toilet and separate shower room, and hospitality tray, this room is 60 euros per night.

Sky bedroom : This bedroom has a kingsize bed and a single bed included. It is also on the third floor and again, the views are wonderful. With its own shower room and toilet, hospitality tray, this room for 3 people is 70 euros.

You could also rent Star and Sky bedrooms together for 5 people for 110 euros a night with breakfast included.

From the A20, take the exit 56, towards Figeac. Follow this road for half hour, then Roundabout for Livernon/Assier. Take left exit for Assier. At Assier, go through village, and take last right for Lacappelle Marival. At end of road, go right for Figeac. Take next left for Le Bouyssou/St Bressou. Take next left again for Le Bouyssou/St Bressou. Just before Le Bouyssou, go left following small sign for Bel Air. After 3kms, the next house on the right after the Bel Air sign is Le Foursou