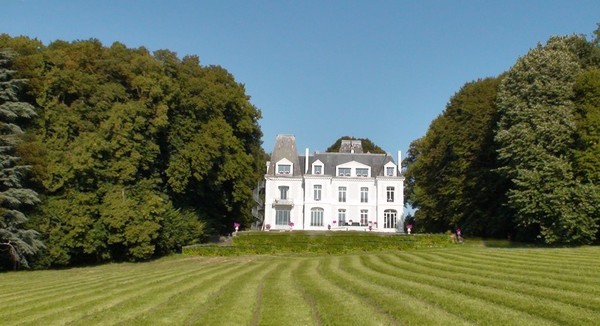 Built in 1860 by a Parisian industrialist on the heights of Trouville, the Castle of Ferns overlooks Deauville offering its occupants a view over all of the Côte Fleurie.

Firstly elegant seaside villa decorated with an exotic winter garden, the castle underwent extensive expansions and redevelopment in the 20s that made him this stately.

The year saw the field is morceller, amputated his farm and much of its farmland, it now consists of a fine ensemble consisting of castle building and its many joint located on a romantic park of 5 hectares.

Invested by the German army during World War II, the Castle became successively annex of a religious response to the massive destruction suffered by the city of CaenAnd summer camp and finally convalescent home.

Unintended Victim of the crisis of the 90s, the castle remained abandoned, walled up until it was purchased by an individual in 1997. It then began a massive restoration campaign to erase the traces of a sometimes painful past and restore his soul to the field of yesteryear.

now savedThe property is now open to guests and friends who in turn relish the charms of this sleeping beauty that its passionate owners will be delighted to share with you.